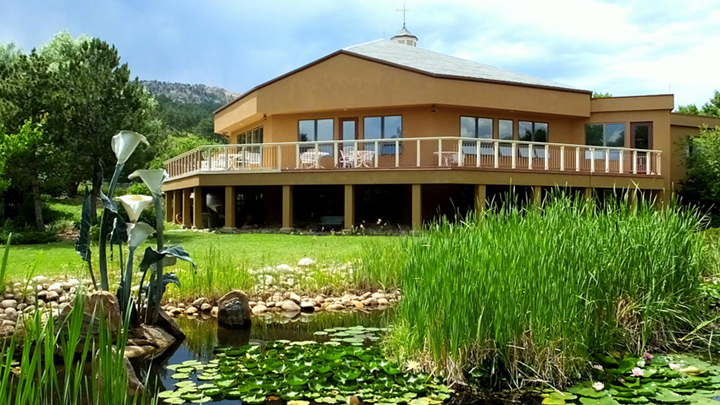 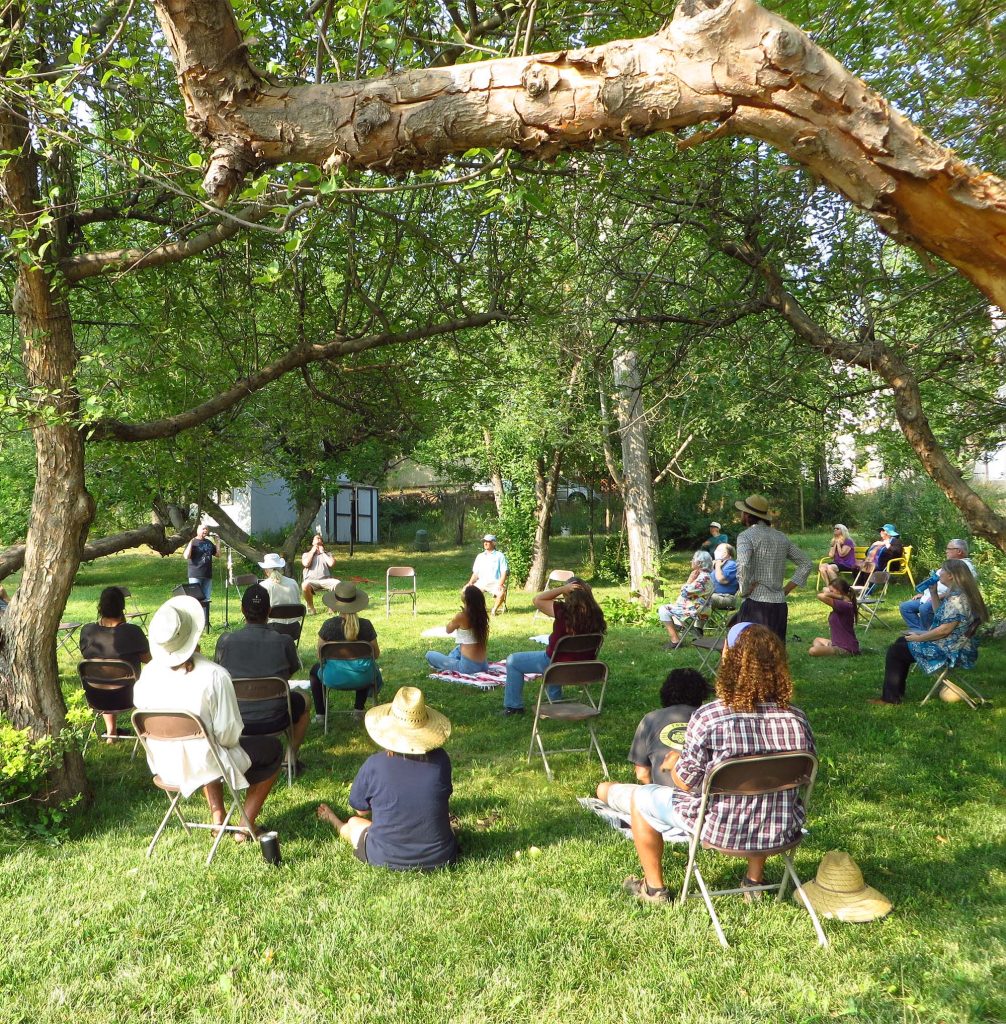 The philosophy of the Sunrise Ranch community and our spiritual center is best expressed in our agreement to honor Universal Being.

Sunrise Ranch honors Universal Being in all its forms—through people, through nature and through all creation. We see this attitude of honor for Universal Being as the pivotal factor for the future of humanity.

Most of all, we honor and welcome the expression of Universal Being through ourselves. We believe that this orientation in living is what opens the door for a full knowing of the wisdom and love that is within everyone. It is what lets the individual give their greatest gift to the world and know the greatest fulfillment that is possible for a human being. We refer to this philosophy as Primal Spirituality.

All of Sunrise Ranch is dedicated as a teaching and demonstration site for this essential wisdom—both the inner knowing of Universal Being and the practical application of that knowing. This is why we practice and teach sustainable agriculture and farm-to-table food preparation. This is what is behind all the workshops, conferences, concerts and courses that we offer. This is what we teach in our internship programs and in all our courses for spiritual awakening and personal development. Sunrise Ranch exists to embody this truth and to bring it to the world.

We believe that Universal Being is doing its best to incarnate and express fully through each person, not as a separate reality but as the core reality of who they are. And when it does, that person becomes whole and creates wholeness in their world. They bring healing to the land, to other people and to the planet. Whole people—whole world.

This is what allows our individual worlds to thrive. This is why Sunrise Ranch is flourishing. And it is the experience of this simple, profound truth that will let Planet Earth become the garden home that it is destined to become.

To us, this is not just a nice idea but a guiding principle to be embodied in everything we do. If you agree, we welcome you to join with us in bringing this experience to the world. 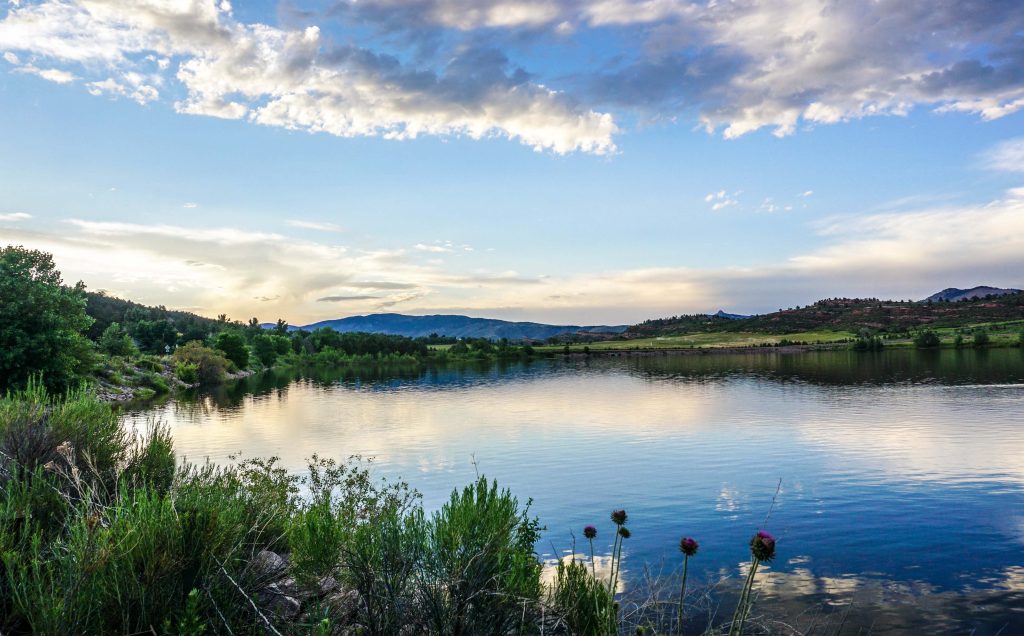 Atmosphere is that invisible quality that affects your overall experience of a place. It includes the location, the physical surroundings, buildings, furniture and artwork. It also includes the configuration of people present, co-creating an experience with their emotional states, their thoughts and beliefs, and projections of perception.

Atmosphere is about the energy of a place and the feeling quality that you have being somewhere. It can’t always be defined as simply being influenced by one thing or another. It exists mysteriously in the air and influences the general tonal quality of an experience.
At Sunrise Ranch, we pride ourselves on the atmosphere that we provide for our friends and family. Whether here for a workshop, event or retreat, a guest at Sunrise Ranch gets to experience the substance of surround and care that this place has been building for more than 75 years. Since 1945, people have been stewarding this valley with a spiritual intention and a focus of radiating love into their world. For generations, people have been coming from all over the world to Sunrise Ranch for personal growth, enlightened teachings and the renewal available in an atmosphere rich with a sense of home.

We know that thought and intention make a huge energetic impact on the substance they are directed toward. As one of the oldest intentional spiritual communities in the country and a thriving spiritual retreat and conference center, there has been much positive thought and intention directed toward this land and the structures and forms that live on it. This has soaked in over years and manifested into a palpable vibration that may be sensed immediately upon arriving on the property. Like a song that dances along a gentle breeze and uplifts your spirit, the atmosphere at Sunrise Ranch is refreshing and nourishing for the higher work of awakening, growth and development! 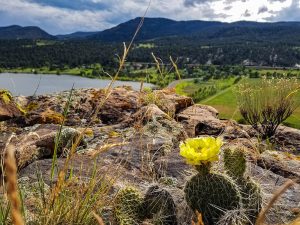 Sunrise Ranch was no more than a barren 123-acre farm in Eden Valley when it was purchased in 1945. There was a barn, two run-down residences, and a few outbuildings on the property at the time of purchase, but not much else. Lloyd Arthur Meeker, along with about a dozen other committed individuals, lived in tents while they began repairing the buildings and restoring the land.

Rebuilding the garden soil was also a priority. The first gardeners imported carbonaceous material, in the form of straw and horse manure, and set the precedent for our land-stewardship practices of building health instead of battling disease.

In 1952, the Hansen Feeder Canal was established and served as a much-needed source of irrigation and drinking water for Eden Valley. The property gained many new buildings, some constructed from recycled or locally produced materials, and mostly constructed by community members. By 1986, Sunrise Ranch had built the Pavilion, its hospitality and dining center; several residences; and a geodesic dome for events and services.

The early emphasis on fortifying the soil’s health has continued and expanded over the years. In 1995, Sunrise Ranch set up a Community Supported Agriculture farm operation, as well as a sustainable-agriculture education program through The Stewardship Community and Guidestone Farm, which thrived for more than 10 years. Their work came to a close in 2006, and Guidestone Farm moved to Buena Vista, Colorado. Their management was fruitful and productive for Eden Valley and for everyone who participated in the farm project with them.

After more than a half-century of dedicated land restoration and chemical-free farming, Sunrise Ranch was finally able to start selling grassfed beef. This signified a full recovery for the land from its over-grazed, over-farmed state. Cows could now graze without endangering the soil or plant life.

Welcoming guests has always been a central activity at Sunrise Ranch. It is our pleasure to invite you to our community to share the atmosphere of home as you bring your own workshop or event here. A variety of sparkling-clean accommodations are available just a one- or two-minute walk from meeting rooms, dining and hiking trails. From three-bedroom suites to triple rooms, we take great care to provide your group with the overnight setting that will enhance your conference work. For more information, please visit our Accommodations page. 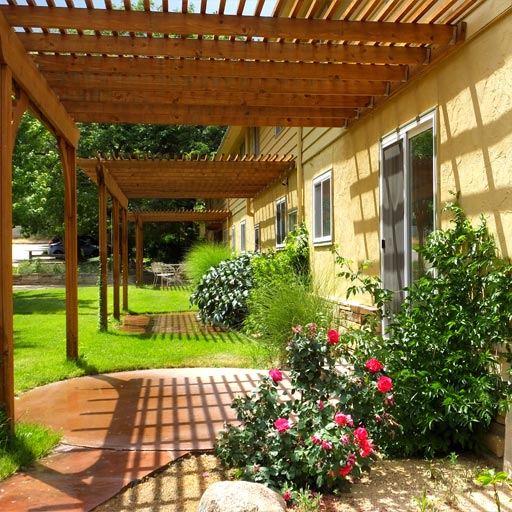 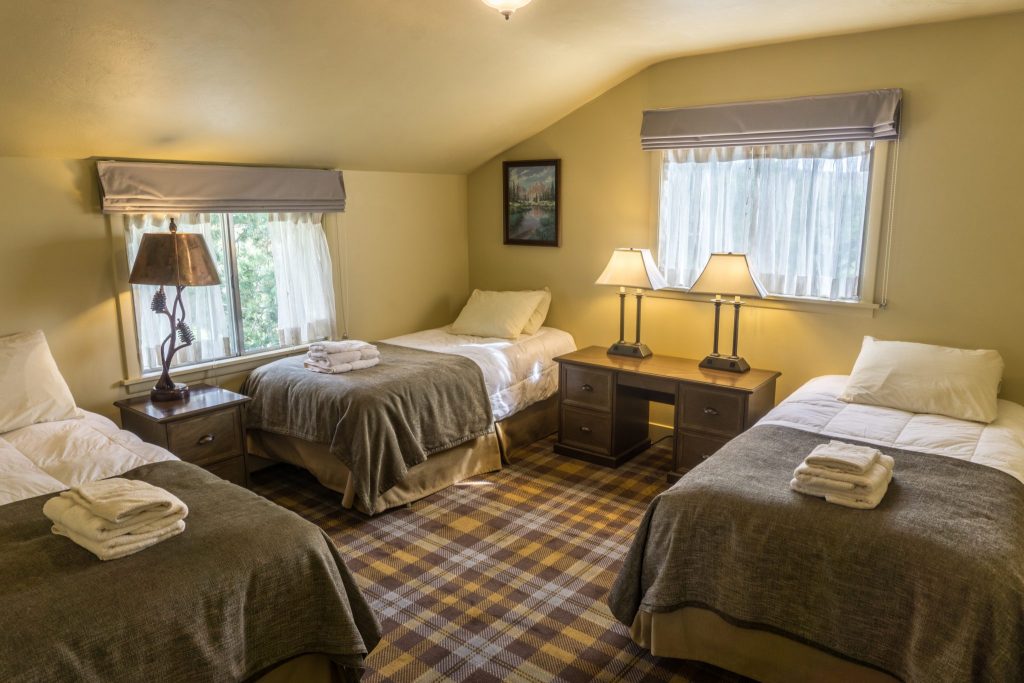 Our wonderful guest rooms create a loving and restful surround for our guests. All of our rooms were remodeled in the spring of 2016 and are uniquely decorated by our staff to give you a sense of being in a family home, not a chain hotel. Each room is given individual attention and the spaces are blessed by our Homekeeping staff before your arrival. We take housekeeping to a higher level here at Sunrise—a level of care, comfort and relaxing peace that lets you know you are home.

Most of our guest spaces offer European-style shared baths; we also offer some full apartments with kitchen and private bath amenities. Choose from single, double, triple or dorm rooms, or opt for an apartment. For more detailed information about our guest rooms, please visit our Accommodations page.

The Sunrise Ranch Pavilion is home to our Guest Registration, our state-of-the-art kitchen and dining room, and stunning meeting rooms. The Pavilion was designed and built in the 1980s by the Sunrise Ranch community and friends from around the world, and stands as a testament to the power of agreement and communion.

Our meeting rooms in the Pavilion include the Green Ridge Room and the Rimrock Room. For more information about these and other meeting rooms, see our Meeting Spaces page. 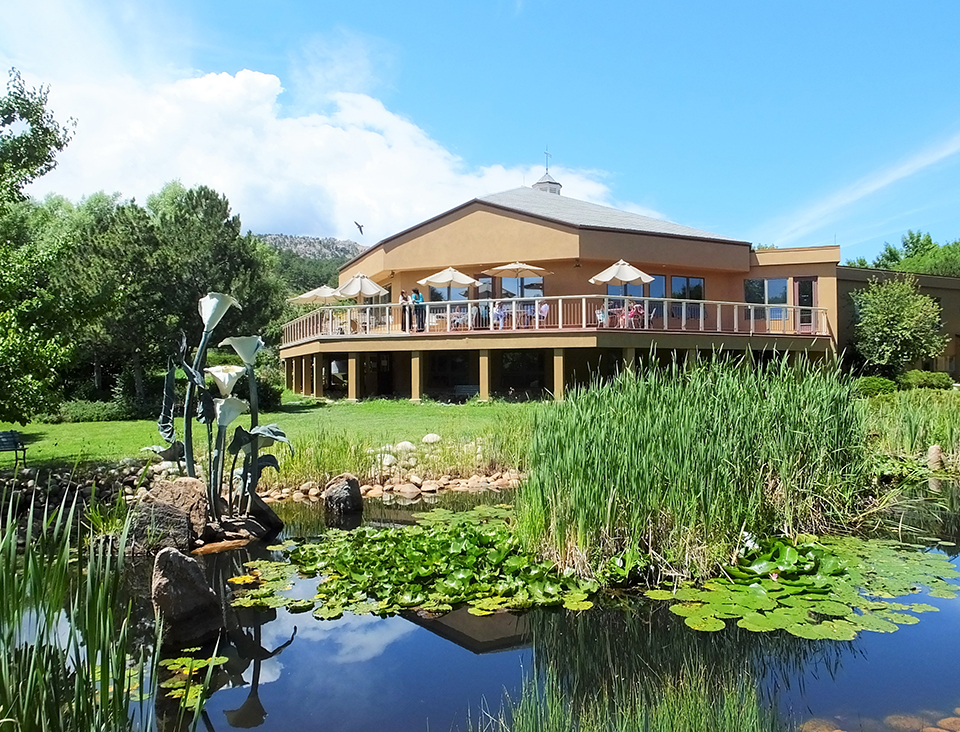 The Dome at Sunrise Ranch is an auditorium where we hold our Sunday morning services and other special events. The Dome was built in the 1970s by friends who came from around the world to create this remarkable auditorium. It is a home for live acoustic music that lifts the spirit and nourishes the soul; a place for public lectures by global thought leaders; and a chapel for the Sunrise Ranch community.

The Sanctuary is a place of meditation and Attunement. This is where individual Attunement sessions are held, and it is the place where the Saturday evening meditation calls occur. There is a library of Emissary literature available, and we invite visitors to spend time here in quiet meditation. To learn more about Attunement, visit our Attunement website. 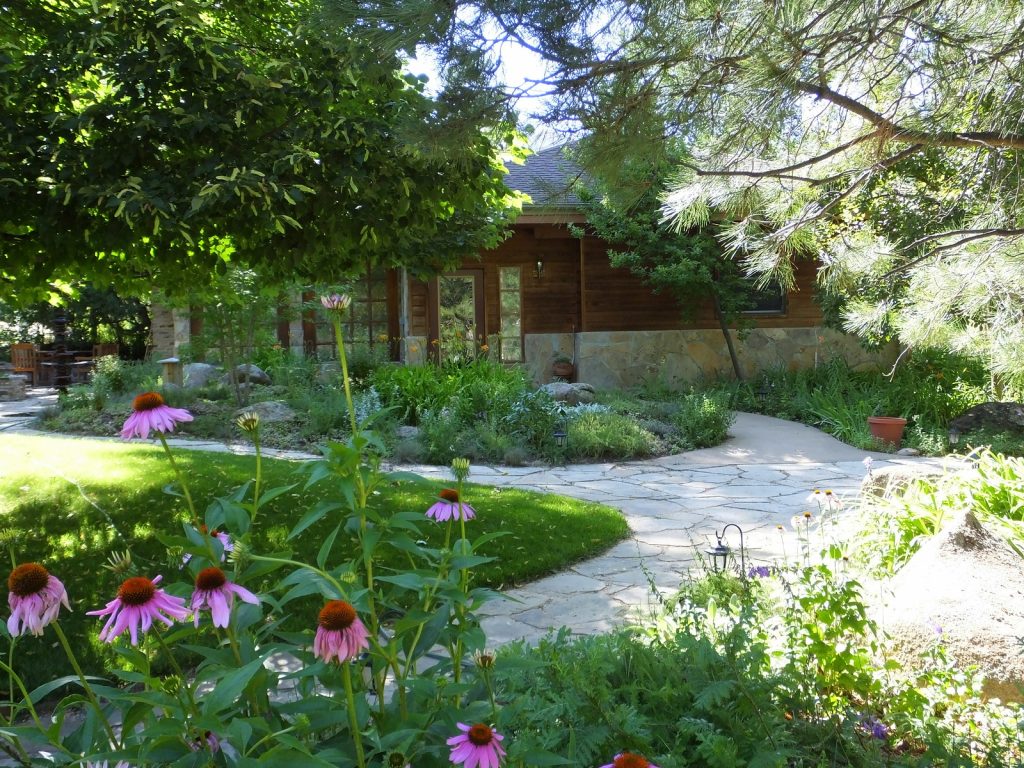 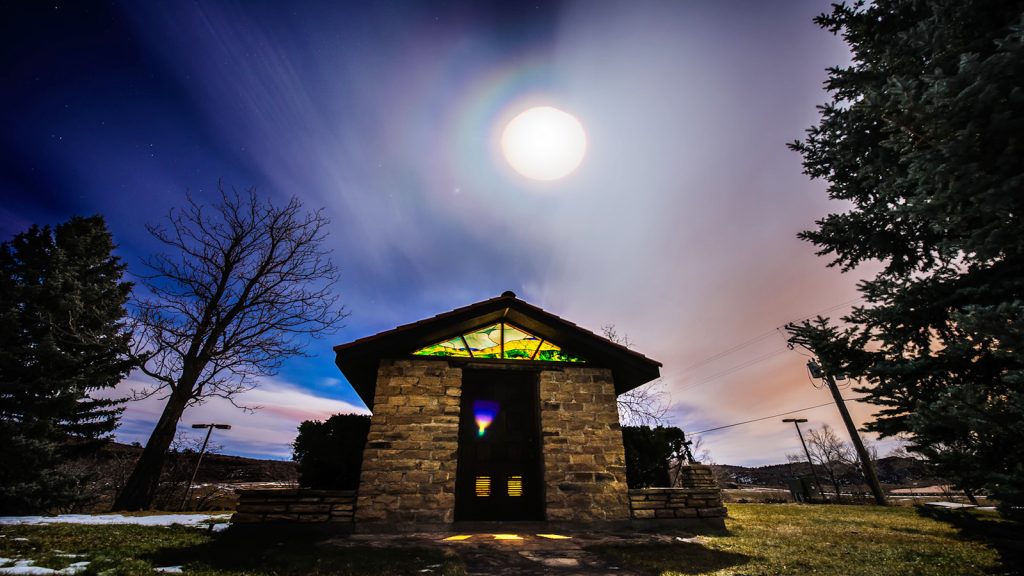 Uranda and the first pioneers of Sunrise Ranch built The Little Chapel in the early 1950s. The Little Chapel represents the Place of the Most High in every person. It stands at the highest point in Eden Valley.