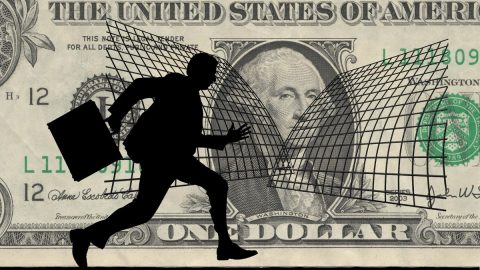 That the U.S. faces a budget crisis almost goes without saying these days. The national debt has swelled to unbelievable proportions, almost $20 trillion by last count. And although the annual deficit has declined in recent years and now stands at around $440 billion, this is still an enormous amount of money and can’t be sustained indefinitely without further bankrupting the country. Just servicing the debt (making interest payments to creditors) consumes a huge slice of the annual budget.

Even though the current administration as well as members of Congress are reluctant to speak of raising taxes, it is becoming increasingly obvious that something must be done to bring in sufficient revenue to not only eliminate the annual deficit but generate a surplus that will begin to pay down the debt. It comes down to this: Either raise taxes or risk drowning in a sea of red ink.

But as you probably know, raising taxes is highly unpopular. No one—whether super rich, modestly rich, middle-class or modestly poor—wants to pay more income tax. Even the hint that this might be done is considered to be the equivalent of political suicide by those running for office or already in office. However, there is one source of revenue that Congress has shown a willingness to increase and could do so again. I refer to so-called “sin taxes.” For example, the federal cigarette tax, after a 62 cent increase in 2009, is now at a whopping $1.01 a pack!

What makes sin taxes so appealing, of course, is that they not only raise revenue but presumably discourage sin. But sin by whose definition? One person’s sin is another’s wholesome pleasure. Are politicians revealing their puritanical roots here? My aunt’s doctor prescribed smoking to help her relax. Shall we accuse him of leading her into sin? My own health advisor suggested a glass of wine a day for cardio-vascular health. I’m happy to report that I’ve been able to consume this for many years without guilt or other ill-effects save for the financial drain exacerbated by the high excise taxes.

Sin is a religious concept. It has meaning only to a consciousness programmed accordingly. No, I’m not recommending smoking and drinking as essential to a positive lifestyle. I am simply questioning the propriety of singling these activities out for taxation. And I seriously question whether sin will ever be eliminated or even reduced by taxing it. High-income individuals will simply pay more without blinking an eye, while those with low incomes are more likely to endure the hardship of having less for basic necessities than they are to forego what to them are two of life’s simple pleasures.

I would also point out how obsolete and specious the term “sin” is this context. Something like “life-enhancing/life-destroying” seems more appropriate. Does an activity, given all the factors of individual circumstance, enhance or destroy life? This is the real question.

Why restrict sin taxes to tobacco and alcohol?

Granted, alcohol and tobacco may destroy life if used to excess, and as long as taxes are necessary, a pretty good case can be made for making users of these substances pay their fair share. But there are many other substances and activities that are at least as harmful. In the interest of fairness, shouldn’t the equivalent of sin taxes be levied on them?

A few examples: Coffee has been linked to high blood pressure, low blood sugar and a variety of other ailments. Yet it isn’t federally taxed and, being considered a food, is generally exempt from state sales taxes. The same is true of refined sugar, which some nutritionists call “white death.” In fact, junk food from Cheese Puffs to Diet Pepsi, get a free ride despite recent studies confirming the deplorable health of the nation’s youth. Now why shouldn’t sin taxes be expanded to include these and other nutritional sins against the body?

And speaking of destroying life, what about guns? Few things do it more effectively. Heavy taxes on gun purchases might keep a few more off the streets, and I would have no qualms whatsoever about making collectors of destructive weapons and killers of defenseless animals pay extra for the privilege.

One way to deal with overpopulation

Overpopulation may be the most serious problem on Earth today, as it lies at the root of so many others: poverty, deforestation, pollution, traffic congestion, etc. Yet the tax code grants substantial exemptions and other breaks for children! Wouldn’t it be more sensible to repeal these and impose “baby taxes,” at least on families having more than two children?

Surely gambling, as a harmful addiction, is in the same league with smoking and drinking. How about a stiff tax not just on gambling profits but at the time any bet is made, including the purchase of lottery tickets?

Churches profit from sin, why not tax them?

Finally, a good case can be made that religion, the supposed antidote to sin, is itself a sinful and life-destroying institution. For many, religious belief systems form the core of conditioning that needs to be cleared in order for the truth of love to be known. Religious beliefs are divisive and they discourage personal responsibility (“God will save me, regardless.”). So why on earth should churches be exempt from taxation? Shouldn’t institutions with such a vested interest in sin be themselves subject to sin taxes?

Here then are some tax ideas that could, if you think about it, raise an enormous amount of revenue, and the “sins” they tax are, in this humble writer’s opinion, at least as harmful as puffing and imbibing. Yes, I’m willing to abandon the whole notion of using the tax code to inculcate morality; in fact, I think it’s futile and immoral. But if politicians nevertheless insist on it, let us insist on fairness.

As for the debt crisis, its ultimate solution requires something much more fundamental and close to home than adjusting revenues and expenditures at the federal level. Am I living within my means? Is my own lifestyle life-enhancing or life-destroying? In the final analysis, government fiscal responsibility is a function of citizen financial management, just as the overall quality of political leadership is a function of the attitudes and qualities of character expressed by individual constituents.